A half day tour to Corinth

A Half Day Tour to Corinth

During this tour you will have the chance to visit the Corinth canal, which was built about 150 years ago in order to join the mainland to Peloponese. The trip lasts one hour from the center of Athens. 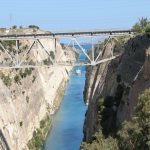